I am very pleased to announce the publication of my latest book, “Sailing Free – The saga of Kári the Icelander”, a novel co-authored with my good friend and colleague Gabriel Stein. 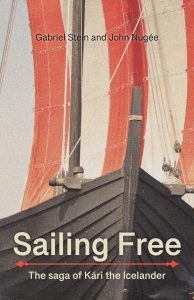 “… a gripping tale of law and justice, liberty and freedom, trade and adventure set in medieval Iceland …”

Sailing Free follows the lives of Kári Ragnarsson, an Icelandic shipowner and merchant trader, and his brother Guðmundr, who stays at home in Iceland to run the family farm, as they traverse adulthood against the backdrop of life in the 11th century Icelandic Commonwealth or Free State.

Kári’s business takes him across the northern seas to Orkney, Scotland and England, where he learns the ways of trading in the Viking world, while Guðmundr gets caught up in a complicated love triangle that becomes a dispute with a local chieftain and threatens to ruin his family. All around greedy neighbours seek to amass power and subvert Iceland’s ancient liberties; feuds are common and justice is being eroded and abused by the powerful.

An unexpected storm drives Kári and his men to distant lands, where he falls foul of a powerful king and is forced to fight for his life and his freedom overseas, before returning to Iceland to find himself having to defend the very same rights for his brother. As the Church and the Free State lock horns over Iceland’s legal customs and way of life, Kári is compelled to defend much more than his family’s fortunes.

Through this traditional-style family saga, we use the history and traditions of the Icelandic Commonwealth to explore questions of freedom, politics, religion and sovereignty, themes which are just as relevant today as they were a thousand years ago.

“A fast-paced and intriguing tale about the adventures in Europe of an Icelandic hero, a real Viking, who came from one of the few countries at the time not under the tutelage of kings.”
Hannes Hólmsteinn Gissurarson, Professor of Politics, University of Iceland

Sailing Free is available in both paperback and e-book versions, and can be found on Amazon here.