Ten phrases I wish to hear less often in 2022

Despite the fact that it is merely a quirk of the calendar, and no more special than that, the start of a new year is still an opportunity for taking stock, looking back over what has happened in the last 12 months and looking forward to what we all hope, every year, will be a better time to come.

Many people do this via a set of New Year’s Resolutions, regularly made and equally regularly broken.  It is said that one of the commonest resolutions people both make and break is to go to the gym more often, and indeed gyms rely on it:  they sell large numbers of annual memberships every January which are used sparingly if at all after the first enthusiasm wears off, and if everyone who signed up for an annual membership actually used it at all regularly, the gyms would struggle to fit everyone in.

This year, by way of something different, I offer ten phrases we all heard rather too much of in 2021, and I shall measure progress during 2022 by how many are still current when we reach the end of the year.  Some of them are personal bête-noires, some are more serious ones, and many carry with them deeper lessons and learning points.  I shall start with two which have really come to the fore since the pandemic started nearly 2 years ago.

“The NHS is at risk of being overwhelmed”

This is not exactly a saying of 2021 per se – it has been said almost every winter for as long as I can remember, whether for the annual flu cycle or more general ailments of the colder season.  (The interesting thing is that the NHS never quite is overwhelmed – stretched, certainly, but not overwhelmed).  But without doubt the phrase has been trotted out with increasing frequency over the last two years, and even so the Health Service is still operating, still there for emergencies and also (despite increasing waiting list times) most of the other calls upon it too.  The danger is that we no longer listen when the government solemnly invoke the spectre of disaster.  Has no-one at the Department of Health read the fable about crying wolf?

“We must protect the NHS”

I am sure I am not alone in looking forward to the time when the NHS, doctor’s surgeries and the like are there to protect and serve us not discourage us from using them.  If the NHS is so fragile that to use it risks destroying (or “overwhelming”) it, then the solution is not to deny the population access to their health service, but to build a health service that is robust enough to handle the demand it faces.

From the world of politics, one could choose any number of statements that one never wants to hear again.  But as a representative statement that encapsulates everything that is wrong with UK politics at the moment, one stands out:

“That was not a party, it was an official gathering”

As in “I am lying to you, and you know I am lying, and I know you know, and I don’t care”.  Of course there have always been politicians who have been “economical with the truth”, but latterly it seems to have become the government’s default approach to no longer even try to engage with the public in an adult, informed and honest manner, to no longer try to persuade by the strength of their arguments rather than the brazenness of their lies.

More generally, one cannot help feeling that 2022 will be better if one never hears anything more – anything more at all – from the Prime Minister.  Quite simply, people have stopped believing anything he says; living proof that indeed, you cannot hope to fool all the people all the time.  I do not often include political cartoons in my essays, but this one did make me smile: 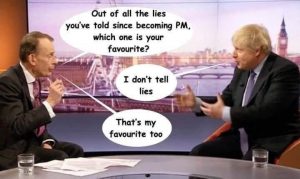 Ranking almost as high in the “if you believe this you are a fool” stakes is the stock phrase, trotted out after so many tragic or disastrous episodes in our national life, that

“Lessons will be learned”

This phrase is used by those in authority as a catch-all response, whether to another case of a small child being abused or found murdered, or another official body containing people with racist views, or whatever.  It sounds so positive, so much more proactive than “we will try to do better in future”, while neatly avoiding any admission of responsibility or personal failing on the part of the senior person saying it.

“Lessons will be learned”, then.  But they never are, and the only thing one knows with sickening certainty is that the current instance which caused the remark will not be the last, will be followed by something very similar soon enough.  Why is this?  And how can we get those in authority to actually learn from their past mistakes and avoid repeating them?

One mistake which many, including me, think is being made in front of our eyes is the official response from the Bank of England to the increasingly rapid rates of inflation.  I have written on this quite recently, so I shall only say that if I never hear a central bank official say

“The current level of inflation is transitory”

ever again, I will be happy.  Of course it is transitory, but so is everything, and the question is “for how long?”, closely followed by “and what are you going to do about it?”

Now a couple from the world of commerce and services.  Firstly, something one hears with monotonous regularity whenever you try to ring a service provider:

This was arguably a legitimate response at the start of the pandemic when society switched almost overnight to remote working, working from home and so on.  But now it is merely a catch-all excuse which actually means “this level of calls may be the new normal but we cannot be bothered to staff our call centre properly”.

Closely connected to this is that other thing we are repeatedly told by merchants unable to fulfil an order:

“We are experiencing supply problems/delivery problems”

There is rather more excuse for this; there are genuine supply and delivery issues both across the UK economy and internationally, and the phrase is not just code for “we are facing issues, and have not bothered to find a work-around”.  There has been a succession of enormous changes to society’s discretionary spending habits, with large reductions in expenditure on holidays, eating out and other entertainment, and corresponding increases on (among other things) home improvements, DIY and internet purchases generally, and given the nature of the economy two years ago, driven by just-in-time inventory management and very limited spare capacity anywhere in the system, the rapidly changing expenditure patterns create a real challenge.

Furthermore, the UK is far from alone in suffering from these issues.  Most other western economies have had very similar experiences and have faced similar supply issues, even if we in the UK don’t realise it – one of the interesting side-effects of the much-reduced amount of travelling we are all now doing is that we have less first-hand and personal experience of how other countries are tackling problems that face us all.

It is possible that this phenomenon of change being disruptive is inherent in capitalism itself, where spare capacity is punished and “running with maximum efficiency” is often merely a synonym for “running without any resilience or reserves”, and that in periods of rapid change, the adjustment process is always going to be bumpy and glitch-prone.  But whatever capitalism’s flaws, it does at least adjust, and often quite fast; certainly faster than alternative systems.

None of which stops this phrase being very high up the list of things I want to hear less of as 2022 progresses!

One growing element of society that is not connected to the pandemic at all is Cancel culture.  It is not easy to find one phrase that encapsulates all of cancel culture, but there is certainly one I hope never to hear again, which is

Quite apart from the fact that the phrase strikes me as a nonsense in itself – the average person accused of being a TERF is by and large neither trans-exclusionary, nor radical, nor a feminist[1] – it also stands as a totally reliable indicator that the person using it has abandoned any pretence at balanced discourse or reasoned argument, and believes that the way to win people over to their point of view is to shout insults at them, with the follow-up of trying to exclude them from society if they continue to have the temerity to disagree.

Depressingly, this style of “debate” has become the norm in various elements of society (academia, the arts generally and various parts of the media in particular), and quite how we row back from the current position where Voltaire’s famous dictum that “I disagree with what you say but I defend your right to say it”[2] has in effect been replaced by its complete opposite “I disagree with what you say and I attack your right to say it”, is not clear.  What is clear, though, is that real lives are being ruined, real people hurt, real damage done to the national dialogue on issues which do need to be discussed.

From the important to the trivial for my penultimate phrase, which is:

which has been said at least once during almost every single zoom call I’ve ever been on.  I am not denying the advantages that video calls can offer, and I am sure we will continue to use them even when the world is back to normal – it is almost never the case that technology, once adopted, is just abandoned – but I do look forward to a time when zoom calls are not necessary and the default, the expectation, is that meetings are once again in person.

“I hope you are well/safe”

by now a commonplace opening pleasantry, for example in emails.  A worthy sentiment, and obviously few people would wish anyone the opposite.  But it will be so nice when we can assume it and don’t have to say it.

On which note, we wish all our readers a happy, healthy, safe and above all better 2022.